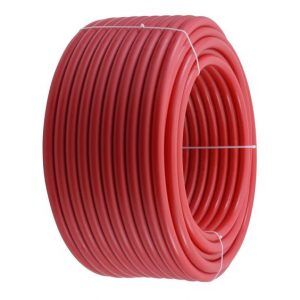 PEX or cross-linked polyethylene,  as it is more widely known, has been on sale for about half a century. Every year, the PEX business expands and strengthens its grip on the pipeline industry. Because of the fantastic benefits it provides, as well as its low cost, more people are converting to this elastic, light, and strong polymer.

Many firms focus in PEX pipes, while others start developing innovative tools that may be employed in installation procedures. The competition of the PEX plumbing sector has waned in recent times, and these firms have emerged victorious.

TUBOMART has earned a reputation for producing high-quality fittings, pipes, and valves for a variety of pipeline configurations for over 20 years. TUBOMART‘s commitment to steady growth and client satisfaction is unbreakable. As we strive for more improvement and quality control, our goods have strong market acceptance and are sold to over 78 countries.

We assure that our piping products have gained  CE, SAI Global, and ISO approvals through our devoted quality assurance management and frequent testing.

This company was founded in 2006, however, it was already established prior to entry into the PEX community. It was formed in 1928 by 2 Detroit-based producers specializing in brass fittings and valves.   Aalberts Enterprises Company owns Apollo, which specializes in the production and distribution of PEX pipes, tools, manifolds, fittings, and most notably, their complicated valves.

Everhot launched its company in 2006 with the development of PEX-B, as well as a plethora of fittings, equipment, and supplies. Everhot has grown into a remarkable franchise over the last decade, carving out its own customer base via aggressive strategic planning and excellent customer service.

Sioux Chief is one of the largest providers of copper manifold and fittings for PEX-based systems due to its ingenuity and knowledge of the pipeline industry. The firm was founded in 1957 as a result of the leader’s brilliant concept. He was the first one to create a copper jut out and air compartment in one. Ever since there’s been no turning back; Sioux Chief has maintained a tight hold on the competitors.

Uponor, the company’s initial pioneer, has always been a frontrunner in the PEX business. In 1988, only four years since their arrival in America, this group purchased the Wirsbo Company. This firm, which specializes in PEX-A, or even the Engel way of PEX, is steadily growing. Uponor has maintained its industry supremacy, with net sales of more than a billion US dollars in 2014.

With over 10 decades of service to the piping world, it’s no wonder that Nibco is a reliable option for any customer. Their inventory includes PEX-C tubing, fittings, and valves. Their company has been established for than a century and is still among the most reputable in the business.

The Viega Company was founded in 1899 in Germany by an entrepreneur merchant. They were able to build a trustworthy reputation and a piping connecting solution via ingenuity, which they presented to America in 1999, a century later. The Viega super press is the world’s leading manufacturer of fitting innovation for commercial, industrial, and residential applications.

Rehau has always been one of the owners of PEX; specifically, PEX-A. This business was a forerunner in the development of the Engel technique. The Engel technique, also known as PEX-A, is considered as the best variety of PEX since it outperforms all global performance requirements.

Mr PEX, which has North European origin, is a prominent producer of radiant floor heating and household cold and hot water systems in the United States. Their PEX-a piping is unlike any other, having the longevity and efficiency to match the brand name.

Zurn was a significant distributor of PEX tube and fittings in the 2000s.   A civil lawsuit case was filed for them in 2007 for a variety of improper fittings that incurred over 20 million dollars in damage. Their credibility has suffered as a result, and they were purchased by Rexnord, a pioneer in industrial engineering and design. To find tools that help you save resources, money, and their most reliable source, from digital specifications to water-saving estimates.

TUBOMART has the most comprehensive online selection of PEX, piping, heating, and HVAC products. We have everything you need for any size residential project at the best pricing on the market. If you do have any difficulties, please contact us so that our trained team can assist you!